H.H. Sheikh Hamdan bin Zayed Al Nahyan, Ruler's Representative in Al Dhafra Region, stated that the UAE is continuing its pioneering process of development, through implementing major projects aimed at diversifying and securing its energy sources and increasing the contribution of clean and environmentally-friendly energy to the country’s economic and social growth. 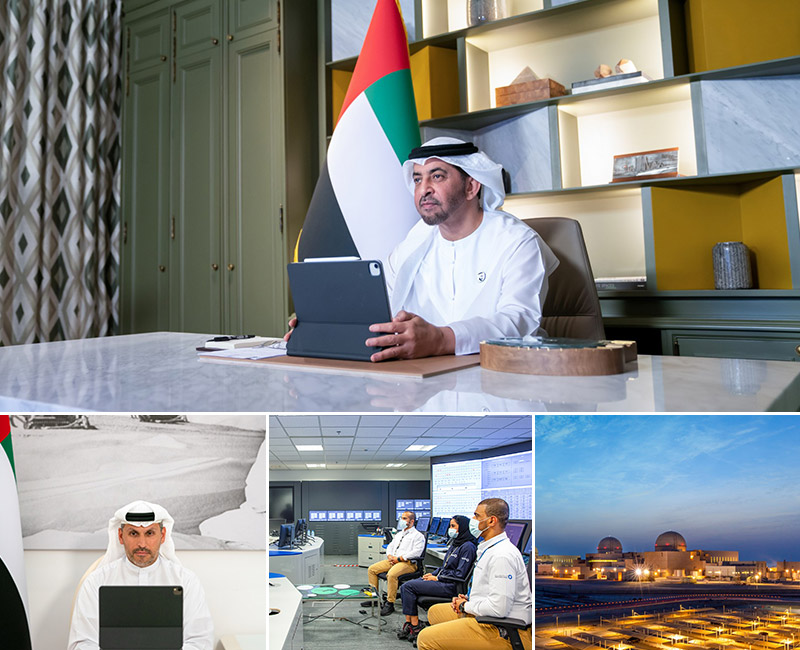 The UAE’s educated youth, who are equipped with knowledge in advanced sciences, is the core of the country’s plans, he added, noting that qualified and educated human resources are being prioritised by the country’s leadership and are managing many projects that require a high level of specialisation, most notably the UAE’s Peaceful Nuclear Program, which aims to diversify the country’s energy sources and ensure their sustainability.

Sheikh Hamdan made this statement during the video conference call with several senior officials and engineers from the Emirates Nuclear Energy Corporation (ENEC) and its companies.

Sheikh Hamdan bin Zayed was updated on the latest construction milestones and received a briefing on progress of the UAE Peaceful Nuclear Energy Program.

During the call, Sheikh Hamdan was briefed about the developments of the program and the ongoing development of the Barakah Nuclear Power Plant, in the presence of Khaldoon Khalifa Al Mubarak, Chairman of ENEC’s Board of Director, and Mohammed Ibrahim Al Hammadi, CEO of ENEC.

"I am delighted to meet with you and be part of this important achievement, which is the success of ENEC’s Nawah Energy Company (Nawah), responsible for operating and maintaining the Barakah Nuclear Power Plant, in operating the reactor of the first plant at 100 percent capacity, preceding the plant’s commercial operation at the start of 2021," he said.

"I would like to congratulate the UAE’s leadership, citizens and residents on this strategic occasion and for associated projects that we will witness soon. We will all celebrate the commercial operation of the plant at the start of the coming year, as we begin the 50th year of the Union," he added.

Sheikh Hamdan also pointed out that despite the extraordinary global health conditions, the plant’s workers are continuing their efforts in all fields of work with high efficiency while expressing his satisfaction at the project’s significant achievements and the progress of work at the plant, and wishing the project’s workers luck and success.

He then highlighted ENEC’s role in developing and reinforcing the capacities of Emirati cadres to operate the plant according to the highest international safety standards, to provide safe, reliable, sustainable and environmentally-friendly energy to the UAE.

Khaldoon Khalifa Al Mubarak, Chairman of ENEC’s Board of Director, expressed his thanks and appreciation to President His Highness Sheikh Khalifa bin Zayed Al Nahyan and His Highness Sheikh Mohamed bin Zayed Al Nahyan, Crown Prince of Abu Dhabi and Deputy Supreme Commander of the UAE Armed Forces, for their continuous follow-up of the latest developments taking place in the UAE's Peaceful Nuclear Energy Program. He lauded the vital role being played by Emirati professionals in the development journey of the Barakah Nuclear Energy Plant.

Al Mubarak also extended his sincere thanks and gratitude to H.H. Sheikh Hamdan bin Zayed for his continuous support and his keenness to follow up "our Emirati talents who are working with dedication to deliver the first nuclear power plant in the Arab World, and to view the latest historic milestones made during the development of the units.''

Al Hammadi stressed that the directives of the UAE’s leadership were the reason for the significant successes in training Emirati personnel who work in the peaceful nuclear energy sector, noting that they play a pivotal role in managing the plant’s development.

Several Emirati nuclear engineers who attended the video call thanked Sheikh Hamdan and the UAE’s leadership for providing them with support, opportunities and development, and expressed their pride at being part of this major project.

In the latest development, the ENEC announced last week that its operating and maintenance subsidiary (Nawah) has successfully achieved 100 percent of the rated reactor power capacity for Unit 1 of the Barakah Nuclear Energy Plant. This major milestone brings the Barakah plant one step closer to commencing commercial operations, scheduled in early 2021.

Once the four reactors are online, Barakah Plant will deliver clean, efficient and reliable electricity to the UAE grid for decades to come, providing around 25 percent of the country’s electricity and preventing the release of up to 21 million tons of carbon emissions annually – the equivalent of removing 3.2 million cars off the roads each year.