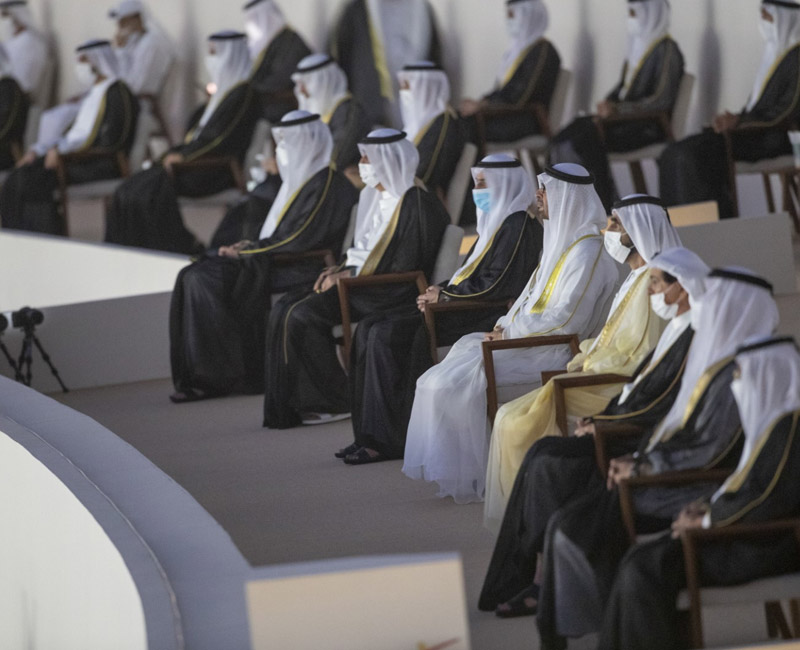 The country’s official National Day celebration was held under the patronage of His Highness Sheikh Khalifa bin Zayed Al Nahyan, President of the UAE; and enshrined the values of the UAE’s founding father, the late Sheikh Zayed bin Sultan Al Nahyan, which have guided the country since its inception.

Their Highnesses the Supreme Council Members and Rulers of the Emirates,Their Highnesses the Crown Prince and Deputy Rulers and Sheikhs, conveyed their sincere greetings and blessings to the leader of the UAE development drive, His Highness Sheikh Khalifa bin Zayed Al Nahyan, President of the UAE, on the occasion of the 49th anniversary of the establishment of the Union, expressing their profound pride of the qualitative achievements made by the UAE and which positioned the nation in a coveted stature among the advanced nations of the world thanks to his prudent vision and right approach toward ensuring the progress and development of the nation in fulfilment of the people's ambitions for more prosperous life and wellbeing. They prayed to Allah Almighty to keep Sheikh Khalifa in good health to continue to lead the successful development drive of the nation.

In this unprecedented year of COVID-19 restrictions, millions of people throughout the seven emirates, and further afield, tuned in from the safety of their homes to watch a performance that will be remembered for years to come as one of the most spectacular and moving, to be held in the UAE.

Themes of hope and optimism played out in a visual and audio extravaganza that took place at Al Jubail Island in Abu Dhabi. The entire production was centered around a 15-metre tall rotating cubed sculpture - which played the storyteller of the show - illuminated by digital lighting, surrounded by pyrotechnic and drone effects, and given the appearance of floating on the sea.

Highlights included touching tributes to the nation’s Founding Fathers and frontline workers who have risked their lives to keep the nation safe during the pandemic. Members of the public played their part in the celebrations as recordings of people signing the UAE national anthem were incorporated into the production. National anthem entries were submitted by the public as part of "Eishy Bilady" campaign launched on November 23.

The creative design was led by a team of talented Emiratis and artistic director Es Devlin, who has been involved in spectacular large-scale productions that fuse music, language and light.

Its title, Seeds of the Union, represents the growth of the UAE from a seed at its formation on December 2, 1971 into full bloom 49 years later. Enshrined in its concept were a series of values that have guided the UAE since inception - Determination, Optimism, Unity, Ambition, Wisdom, Persistence, and The Union.

The revolving cube sculpture is a recurring feature in Es Devlin’s work, and she has explored the form in a variety of contexts, locations and scales. This special sculpture, illuminated against the backdrop of the Abu Dhabi skyline, entitled ‘Seeds of the Union,’ is 15 meters tall – making it the equivalent of a revolving 5-storey building, rotated to reveal four engraved designs on its faces - a seed, a shoot, a flower, and multiple seeds being propagated.

In the first scene, entitled The Dream of the Desert, the cube took on the appearance of the desert sands. Accompanied by a voiceover, a young boy appeared carrying a smaller version of the sculpture, which he planted as a seed to signify the origins of the union. The video projection illuminated the larger sculpture to show the seed coming to life in the form of first a shoot, then a flower and finally propagated seeds. Choreographed pyrotechnics and a live cast group in costume added to the visual exhibition.

The show progressed in its second scene to the development of the union. Entitled The Seeds of the Union, a cast in traditional attire circled the sculpture as names of the seven emirates appeared, accompanied by projected images of the Founding Fathers who formed the union in 1971. The seven values underpinning the show were projected as a voiceover added context to the images in the form of poetic verse.

In scene three, The National Anthem, a collective ‘virtual choir’ of people singing the anthem was projected onto the sculpture to form the flag of the UAE. These harmonised recordings included contributions from members of the public who have shared videos of themselves singing the National Anthem as part of the campaign entitled "Eishy Bilady" launched on November 23.

The fourth scene, entitled Our Leadership, focused on the eternal strength of the Union and its timeless values under the wise leadership of His Highness Sheikh Khalifa bin Zayed Al Nahyan, President of the UAE and Ruler of Abu Dhabi and Their Highnesses, and the Rulers of the Emirates. In their words and in their actions, they emphasis the importance of the UAE’s history, the power of unity, ambition, determination, and the responsibility that each of us has to contribute to the success of the nation.

Scene five was one of the most moving of the event. Entitled Our Frontline Heroes, it featured multi-lingual testimonials from seven key workers who have put themselves on the front line in service to the country during the COVID-19 pandemic. The image of each frontline hero was projected onto the sculpture as if carved in stone as the audience learned of the strength they drew from the UAE’s values. Their experiences represent those of thousands of other healthcare workers, emergency staff and other essential service providers who have made heroic efforts to keep the nation safe. The seven frontline heroes include Amal Badr Al Bussaidi, Head of the Technical Support Unit at the UAE Red Crescent in Abu Dhabi; Iris Ena Diel, a nurse at the Sharjah Expo Field Hospital; Esraa Al Agha, a medical student and volunteer at Al Qassimi Hospital in Sharjah; Habib Saifulmalook, an ambulance driver in Sharjah; Captain Mayed Ali Alameiry, Deputy Harbour Master at the Port of Fujairah and a member of the Executive Committee of the Local Crisis and Emergency Management Team; Dr. Sawsan Salih, a General Practitioner in Ras Al Khaimah; First Sergeant Mohammed Al Salloom, leads the medical services section of the Support Services Department of Ras Al Khaimah Police.

Scene six, Everything is Possible, showcased four Emiratis whose childhood dreams became reality. Starting with an inspirational quotation from the late Sheikh Zayed bin Sultan Al Nahyan about the importance of youth, the scene showcased the ambitions of Hazza Al Mansouri, the first UAE astronaut; Sarah Al-Amiri, leader of the UAE’s Hope probe mission to Mars; Dr Fatima Al Kaabi, pioneer of stem cell treatment for COVID-19 patients; and Chaica Al Qassimi, a martial arts athlete with Downs syndrome who carried the torch for the UAE at the Special Olympics World Games 2019.

Scene seven, entitled A Legacy of Unity, focused on the theme of unity across religious borders by touching upon the late Sheikh Zayed bin Sultan Al Nahyan’s advocacy for cultural diversity and religious tolerance and visually showcasing the establishment of the Abrahamic Family House on Saadiyat Island in Abu Dhabi.

As the breath-taking show came to a close, The Finale examined the milestones and achievements of the past, before looking to the future and the UAE’s role as a global leader in medical research, environmental sustainability and renewable energy.

An incredible pyrotechnic and drone display that lays the foundation for celebrations of the UAE’s Golden Jubilee closed the show.

In line with the UAE’s precautionary and preventive measures, the Committee followed the highest standards of health and safety to ensure everyone taking part was safe. This included a COVID-19 testing policy for all teams and cast members involved in the show.