H.H. Sheikh Hamdan bin Zayed Al Nahyan, Ruler's Representative in Al Dhafra Region and Chairman of the Board of Directors of the Environment Agency – Abu Dhabi (EAD), said it was necessary to continue the Agency’s efforts to strengthen Abu Dhabi's position as a leader in environmental action, studies and research. These will enhance EAD’s capabilities in the field of environmental protection, the preservation of natural resources, and biological diversity and help to achieve sustainable development. 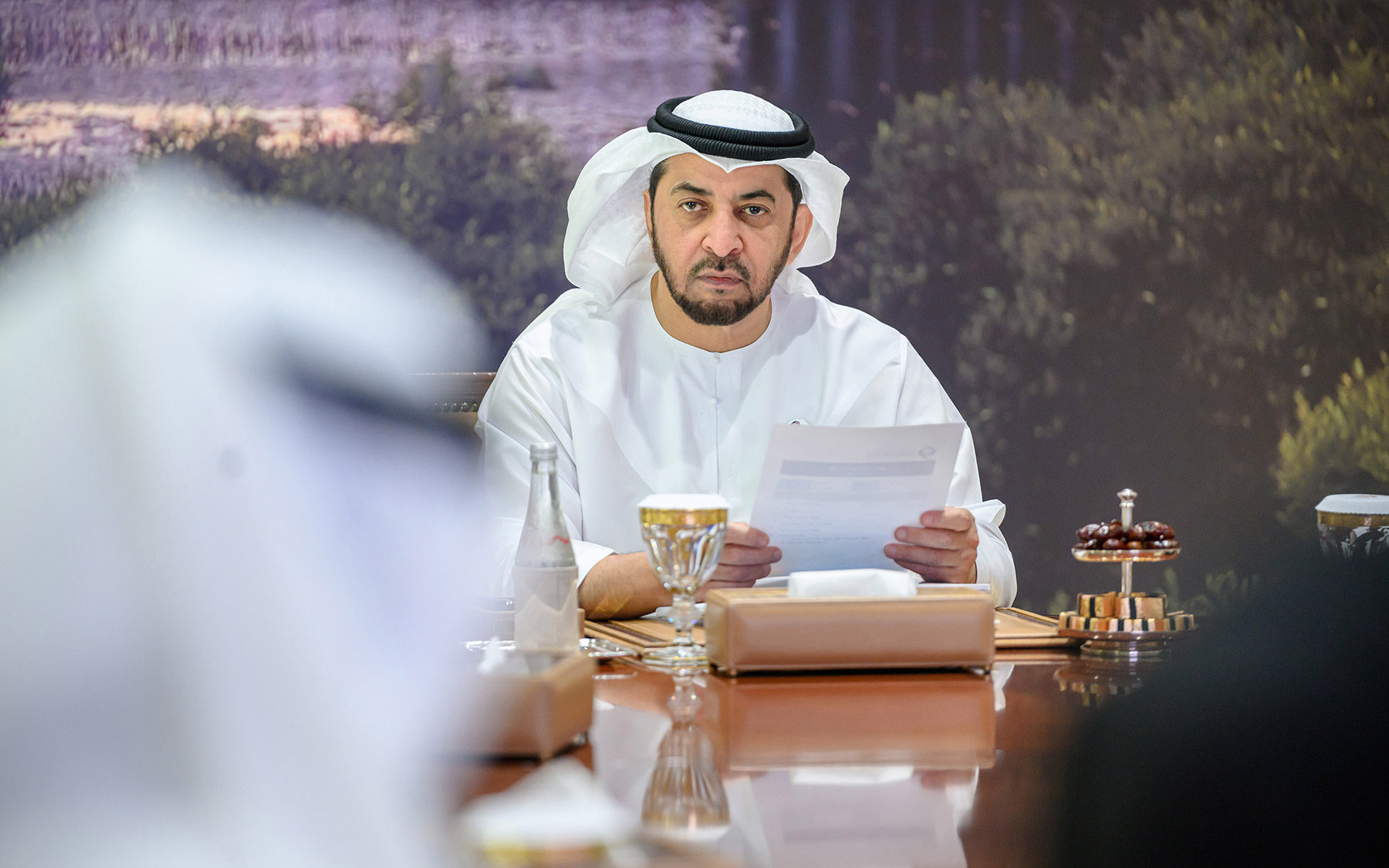 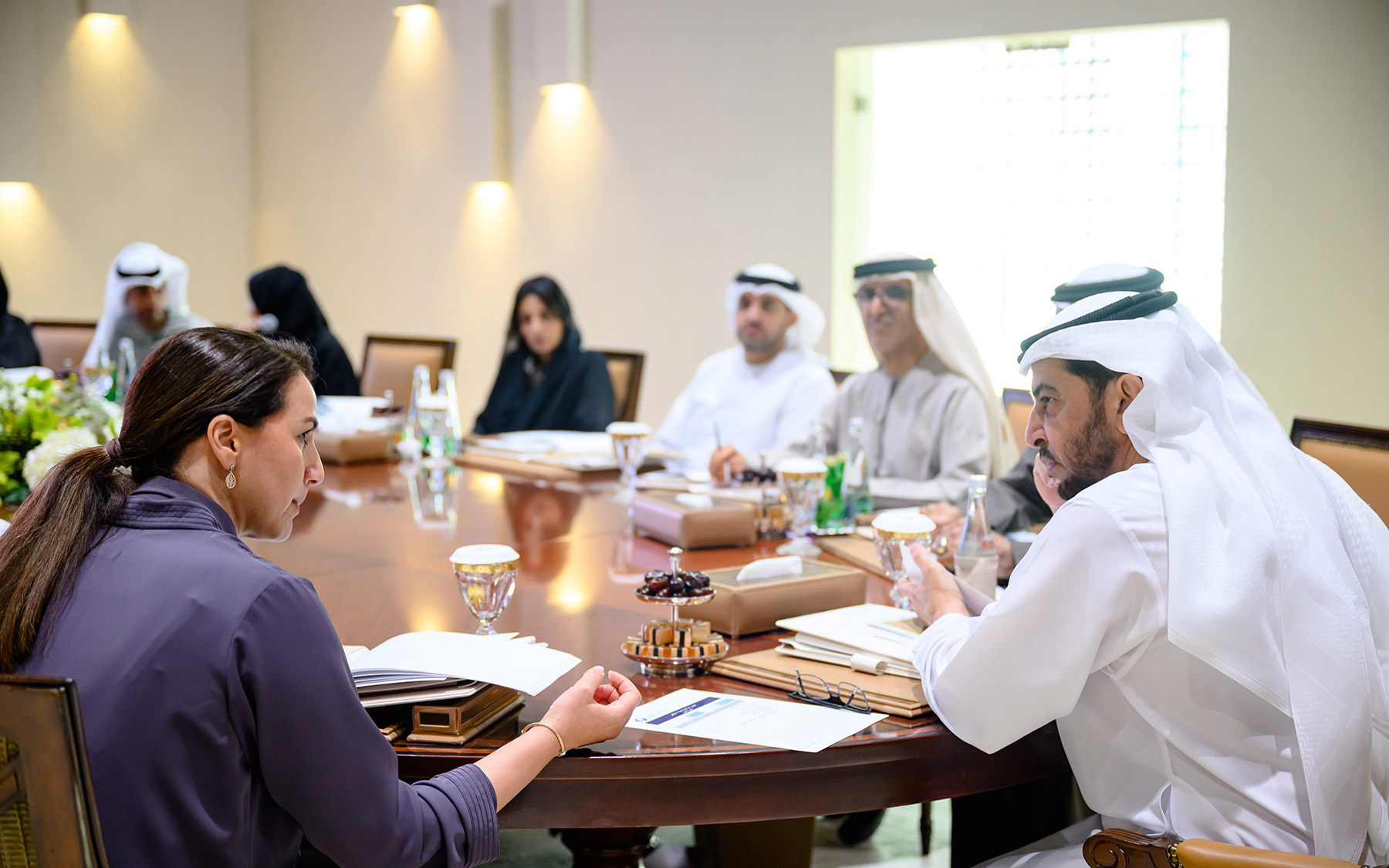 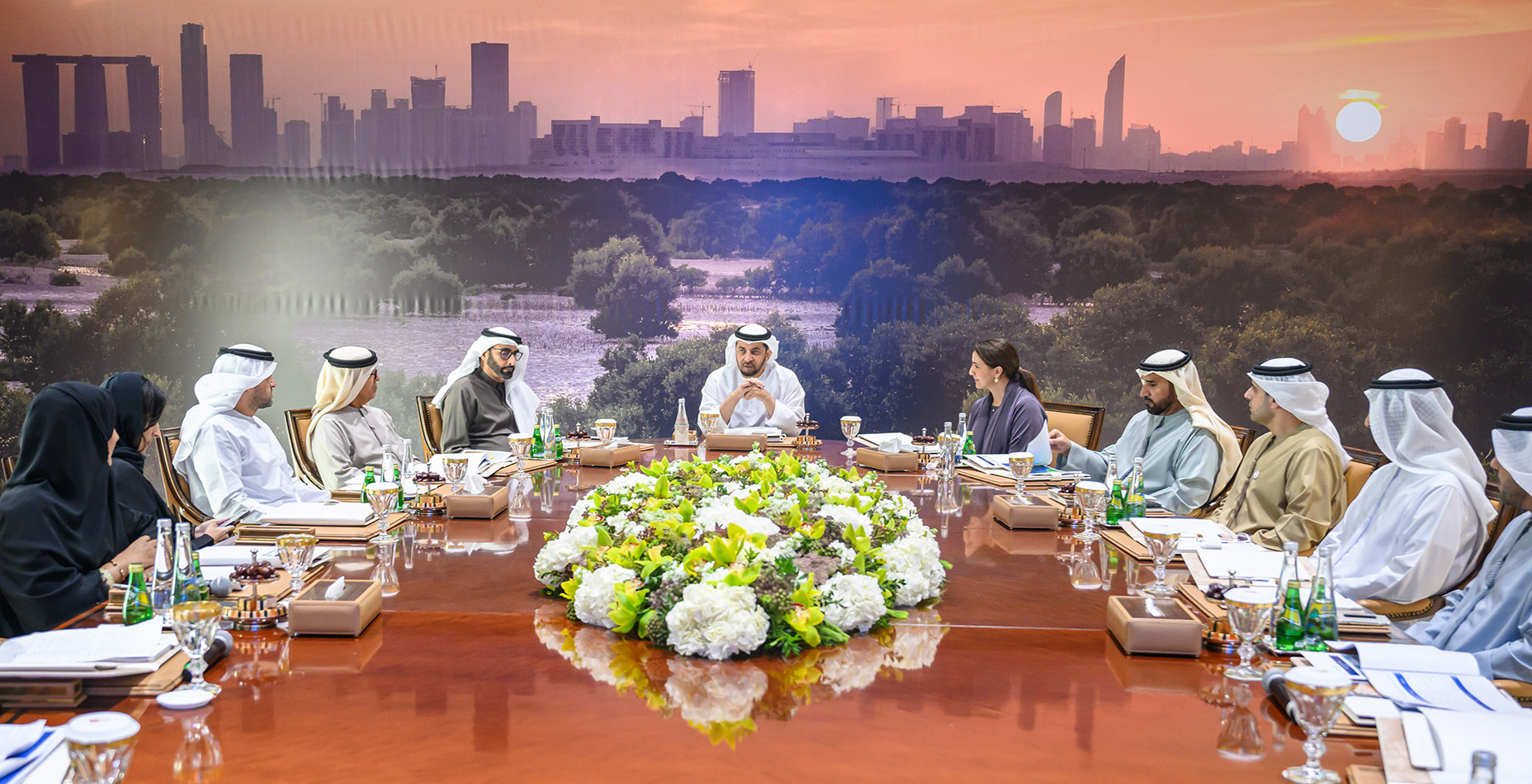 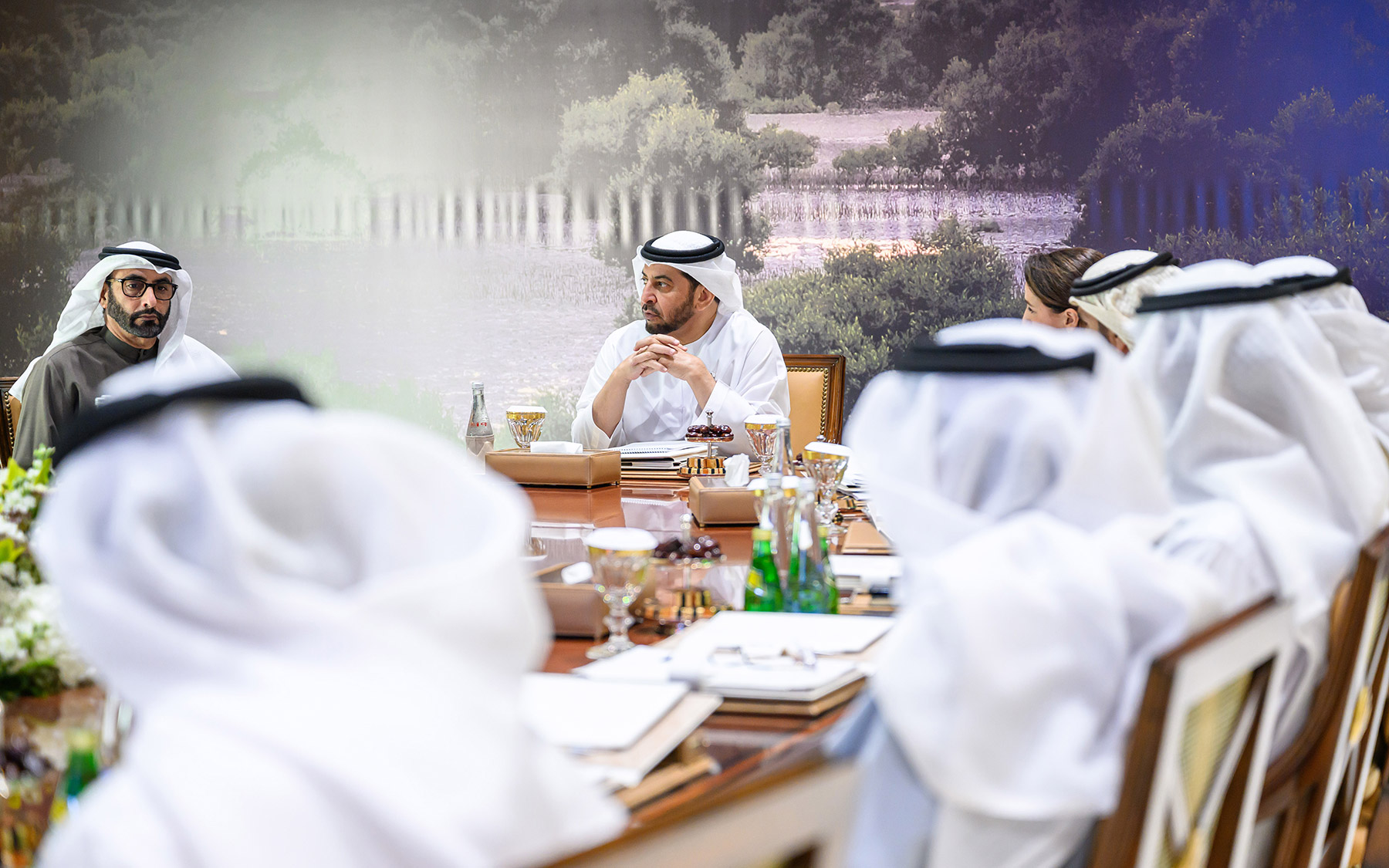 H.H. Sheikh Hamdan indicated that EAD is always looking to the future, and has no limits on its environmental ambitions, which has led its important achievements to resonate locally and regionally. The Agency has gained recognition from the most prominent international environmental institutions and organisations, a key highlight being the Agency’s rehabilitation programmes of Abu Dhabi’s coastal and marine ecosystems being recognised at the end of last year as among the Top Ten Flagship Initiatives by the United Nations Environment Programme (UNEP).

His Highness said that EAD will fulfil the aspirations of the emirate, increasing Abu Dhabi’s global profile as a city that looks to the future and plans a healthy and vital environmental legacy for future generations. This will be achieved through a range of plans, including: EAD’s corporate strategy 2025-2021, and the Environmental Centennial 2071 initiative that was launched last year and fosters a comprehensive and flexible environmental vision that outlines future prospects for the next five decades. Importantly, it will provide a balanced development model that takes into account nature, green development, and environmentally friendly knowledge and technological progress.

The meeting was also attended by Ahmed Matar Al Dhaheri, Director of the Office of His Highness the Ruler’s Representative in the Al Dhafra Region, and Dr. Shaikha Salem Al Dhaheri, Secretary-General of EAD.

During the meeting, EAD’s most important achievements during 2022 were reviewed. His Highness affirmed that these achievements would not have been possible without the diligent follow-up, vision and directives of Highness Sheikh Mohamed bin Zayed Al Nahyan, President of the UAE as well as his continuous support, which has enabled EAD to achieve excellence and its environmental leadership position.

The meeting reviewed the most prominent of these achievements, including in the field of protecting biological diversity. One example is EAD issuing more than 2,700 falconry licences during the current season and highlights the success of the new online falconry licencing service activated by the Agency through the TAMM application, the one-stop platform providing direct access to all Abu Dhabi Government services.

The meeting also dealt with EAD’s success in cultivating more than 4,000 oysters in 2022 at an experimental farm that was established to produce freshwater pearl oysters. This project aims to cultivate 10,000 oysters by 2024, which will enhance studies and research.

The Agency also recorded an increase in the landing rate of key fish species at the end of 2022 in comparison with 2021 due to decisions and measures related to the fishing sector taken by the Agency to protect fish stocks.

The Agency's efforts to produce seedlings of local plant species at a nursery in the Al Dhafra region were also reviewed, as well as the successful numbering of 3,500 Ghaf and Samar trees for the first time in Abu Dhabi, as part of the Agency’s local tree numbering programme launched in 2021.

Board members were briefed on the Agency’s plan to operate the Research Vessel, a mobile marine research centre designed to conduct scientific studies and enhance understanding of marine habitats and key indicators of aquatic life, including turtles and dugongs, in addition to supporting fisheries and monitoring fish stocks.

The Agency’s first Atmospheric Research Expedition was also highlighted, which was conducted by its Research Vessel, which is equipped with advanced monitoring equipment installed and operated by researchers from the Climate and Atmospheric Research Center of the Cyprus Institute, and the Max Planck Institute for Chemistry. The expedition, the first of its kind in the world, covered three continents and eight major bodies of water, and involved 30 researchers who conducted research on air quality, climate, and plastic pollution.

The Agency also succeeded in reducing the inspection process period by 80 percent, thanks to the new electronic inspection system ‘Eltezam.’ Furthermore, 875 environmental violations were recorded and corrected within the industrial, development and commercial sectors. Also, for the first time, the characteristics of deep groundwater wells of between 700-1,000 metres’ deep were explored to identify their optimal use.

The latest developments in the work of environmental policies and legislation were reviewed according to the approved plan set by EAD, in addition to climate change developments, and EAD’s role in supporting Abu Dhabi's efforts locally, federally, and internationally to confront and mitigate climate change.

Abu Dhabi’s climate change policy was highlighted during the meeting, which was used to prepare a strategy for climate change at emirate level. The Agency’s participation in meetings of the National Committee for the Development of the National Strategy for Net Zero by 2050 was also presented, as well as EAD’s participation in the country's delegation that conducted negotiations and side events at the 27th Conference of the Parties (COP27), which was held in Sharm El-Sheikh, Egypt last November.

In the field of environmental awareness, the focus was on the innovative ‘BAADR’ application that promotes environmental conservation practices, launched by the Agency in 2022. It is a free, environmentally friendly application designed to change the environmental behaviours of Abu Dhabi residents, citizens, and residents, and motivate them to be leaders in the process of positive transformation.

During the first half of last year, 1,816 participants used the app and 697 individuals participated in environmental volunteering programmes created by EAD. This is in addition to more than 800 participants in clean-up campaigns that contribute to the promotion of Citizen Science and were implemented in the second half of 2022. In addition, 5,677 people attended 65 sessions that were held to educate the community on the importance of preserving the environment.

The key highlights of the community campaign ‘Mission to Zero’ – launched by EAD last year to achieve the ambitious long-term goal of achieving zero waste from single-use plastics and zero carbon emissions, without leaving any significant impact on biodiversity – were also reviewed. The campaign is considered a major component of the Single-use Plastic Policy, and included the organisation of several outdoor activations, events, and activations to urge people towards the use of sustainable and environmentally friendly alternatives.

The meeting reviewed the range of awards won by EAD during 2022, including the Khalifa International Award for Date Palm, with EAD taking first place in the category of productive and developmental projects, as well as second place in the award for applying the National Standard for Business Continuity Management System at the level of government entities in Abu Dhabi. The Agency also won the Golden Category for ‘Best Use of Social Media – Small Budget’ at the MENA Digital Awards 2021 and was also awarded the Leadership in Energy and Environmental Design (LEED) certificate.

Similarly, the Blue Carbon Environmental and Social Responsibility Project, was selected among the 12 Uplink Ocean Top Innovations by the World Economic Forum. The Agency also won the European Society for Quality Research Award for Quality Management and Implementation which was held in Barcelona, Spain, as well as the Middle East Government and Smart Cities Excellence Award

The efforts and achievements of the Abu Dhabi Falcon Hospital, which continued to provide its unique services, were also reviewed. The hospital treated 7,272 falcons in 2022, as well as another 10,780 animals in total, and conducted 78,393 laboratory tests. The facility welcomed 6,558 visitors as part of the hospital's eco-tourism programme, which has won many international awards.