The UAE, under the leadership of President His Highness Sheikh Khalifa bin Zayed Al Nahyan, has assumed a global stature as one of the world’s leading donors of humanitarian and developmental aid, said H.H. Sheikh Hamdan bin Zayed Al Nahyan, Ruler's Representative in Al Dhafra Region and Chairman of Emirates Red Crescent, ERC. 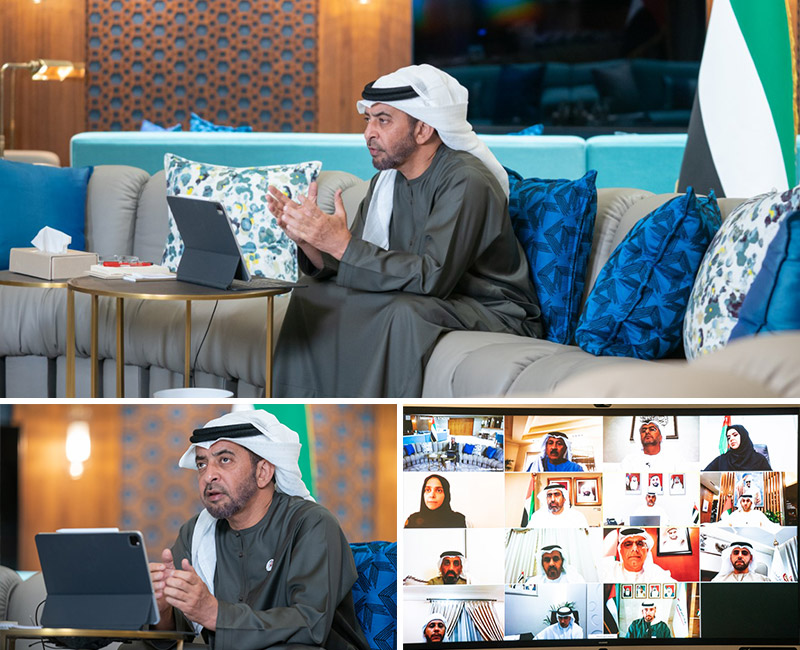 He also lauded the efforts and humanitarian initiatives of H.H. Sheikha Fatima bint Mubarak, Chairwoman of the General Women's Union (GWU) President of the Supreme Council for Motherhood and Childhood, Supreme Chairwoman of the Family Development Foundation (FDF), and Honorary Chairperson of the ERC, in support of the Authority’s role in alleviating suffering of the needy people around the world.

Sheikh Hamdan made the remarks while chairing the first ERC board meeting this year which was held virtually on Tuesday.

He conveyed the regards of the leadership to the board members in light of the leading role played by the ERC in carrying out local humanitarian and social programmes, which benefited more that 2.2 million people across the UAE.

Sheikh Hamdan stated that the ERC has witnessed consecutive developments and achieved key milestones over the past 38 years, noting that it started as a small association with only eight employees but it now has 1,100 employees and 48,000 volunteers.

At the start of a meeting of the ERC’s Board of Directors, Sheikh Hamdan called on an ERC delegation currently in Indonesia to deliver Emirati aid to people affected by the earthquake that recently hit the country.

The head of the delegation briefed Sheikh Hamdan about their relief operations and the delegation’s field activities, in response to the needs of those affected by the earthquake.

During the meeting, attended by Dr. Hamdan Al Mazrouei, Chairman of the board, Dr. Mohammed Ateeq Al Falahi, Secretary-General of the ERC, and the board’s members discussed ways of reinforcing the ERC’s work.

The board was briefed by Al Falahi about several reports covering previous achievements and development programmes and projects carried out in several countries, such as water projects in Mauritania and Sudan, where 10 artesian wells are being constructed in Kordofan, benefitting 30,000 people.

In Mauritania, the ERC is constructing 12 other wells, benefitting 40,000 people. It is also maintaining the Sheikh Zayed Women Care Hospital in Sindh Province, Pakistan, which was built upon a generous initiative from the late Sheikh Zayed bin Sultan Al Nahyan.

On the relief front, Al Falahi explained the details of relief operations conducted recently, including phase one of the efforts to rescue those affected by Typhoon Goni in the Philippines.

The board also reviewed the urgent response programmes carried out to support people affected by the floods in Malaysia, benefitting 52,000 people.

The board members were then briefed by Al Falahi about the progress of the winter aid campaign in 25 countries, benefitting one million people.

The board reviewed the social aid provided to local beneficiaries, benefitting over 2.2 million people, in addition to the aid provided to those affected by the coronavirus (COVID-19) pandemic in the country.