Under the auspices of His Highness Sheikh Mohammed bin Zayed Al Nahyan, Crown Prince of Abu Dhabi and Deputy Supreme Commander of the Armed Forces, Al Dhafra Festival concluded the competitions of its 14th edition this evening. 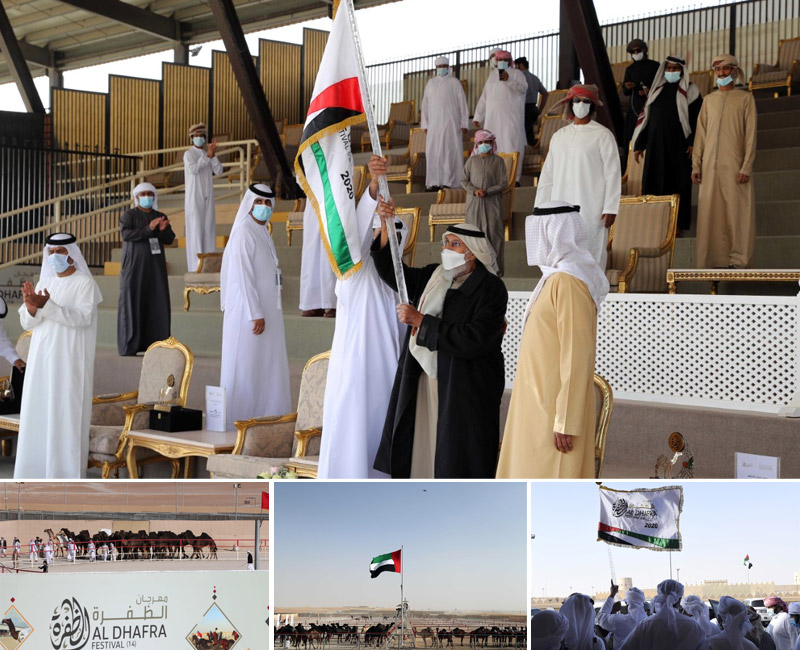 The festival is organised by the Committee for the Management of Cultural and Heritage Festivals and Programmes in Abu Dhabi, and took place in Madinat Zayed in Al Dhafra region in the Emirate of Abu Dhabi.

The closing day of the festival saw the crowning of 30 winners in the Majahim category of the Camel Mazayna, in the presence of Issa Saif Al Mazrouei, Vice Chairman, Committee for the Management of Cultural and Heritage Festivals; Abdullah Butti Al Qubaisi, Director of Events and Communication Department of the Committee; and Obaid Khalfan Al Mazrouei, Director of Planning and Projects Department of the Committee; along with several senior officials, local personalities, and leading camel owners in the UAE and the Arabian Gulf.

Major General Faris Khalaf Al Mazrouei, Commander-in-Chief, Abu Dhabi Police and Chairman of the Committee for the Management of Cultural and Heritage Festivals and Programs, commented that Al Dhafra Festival reflects the legacy of the founding the father, the late Sheikh Zayed bin Sultan Al Nahyan.

He affirmed that Al Dhafra Festival, in its recent edition was launched in the "Year of Preparation for the Next Fifty and concluded its activities in the first month of the UAE’s Golden Jubilee, celebrating the 50-year journey of Emirati generosity in light of the union’s spirit of abundance, humanity, love, coexistence and peace."

He added that the festival echoes the words of Sheikh Zayed: "He who has no past has no present and no future."

"Today we are committed to the heritage of our forefathers and we are very keen to pass this heritage to successive generations through heritage festivals, cultural programmes, and various projects that serve this great legacy. At the same time, we are taking confident steps towards progress and prosperity, with an ambition that embraces the skies, and with achievements at all levels as witnessed by the whole world," Al Mazrouei added.

He also mentioned that, despite the exceptional circumstances aimed at limiting the spread of the Covid-19 virus, the festival witnessed a remarkable turnout with participants from home and abroad, all of whom confirmed their commitment to the precautionary and preventive measures set in advance by the festival’s organizing committee and the concerned authorities. He went on to express his deep appreciation and thanks to participants and workers for their commitment, dedication and responsibility towards Emirati and Gulf heritage, which links current and future generations with their history and culture.

Issa Saif Al Mazrouei, Committee Vice Chairman, said that "this was an exceptional edition of Al Dhafra Festival. The festival lasted for about three months, with 48 days of heritage competitions and virtual events, and 612 prizes awarded for over 85 races within 8 heritage competitions."

He went on to add that Al Dhafra Camel Mazayna Competition saw the largest gathering of camel owners. The competition included 57 rounds to win 486 prizes in the Majahim and Asayel categories for six age groups: Mafarid, Haqqa, Laqaya, Iytha, Thanya, and Hol, with 31 races in the Asayel category to win a total of 258 prizes, and 26 rounds in the Majahim category, to win a total of 228 prizes.

He explained that heritage competitions included the purebred Arabian horse race, the falcon Mazayna, the falconry competition, the Saluki Mazayna, the heritage-related Arabian Saluki 2500 meters championship, the archery competition (one round open to all nationalities, and the Baynunah round for Emiratis), and the Ghanam Al Naim Mazayna (sheep beauty competition), with 125 prizes allocated to the various heritage competitions. He went on to point out that this year’s edition did not include the popular market and related activities in the interest of public safety and the safety of participants and workers.

Over the past two months, the city of Zayed embraced the activities of the 14th Edition Al Dhafra Festival. Al Dhafra Festival is the main heritage and cultural event, and camels were its most precious stars. The activities concluded with the Al-Bairaq races for the Majahim category. This is the jewel of all the races and its most expensive and most competitive. The last days of the festival concluded with the Majahim and the Asayel races. This year’s edition witnessed a remarkable increase in participation, attendance and achievements, all of which reaffirm the value of camels and their place in the hearts of the UAE people and the people of the region, and the care and attention bestowed on these noble creatures. It also reflects this region’s keenness in developing this cultural aspect as a prominent element of our ancient heritage, ancestral legacy, and source of great pride for the people of the nation.